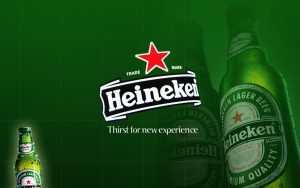 Startime which for several years had Heineken Beer as its headline sponsor, has the distinction of being the catalyst in the worldwide resurgence of Jamaica’s foundation music – ska, rock steady and reggae –  and was Jamaica’s longest running concert series when it first ended its 19-year  run in 2006 after 150 stagings.

Startime is still something of a phenomenon in Jamaica’s music history, in that it grew from a small after-work event in the Old Spanish Town Bar at the now defunct Oceana Hotel (1988) into a massive, internationally reknowned concert which outgrew several venues.

Startime’s reputation and importance to Jamaica’s cultural landscape is reflected in the continuing demand, despite the fact that only five concerts have been presented over the past 7 years; the promoters are constantly barraged with requests from both local and overseas fans to continue the series.

Most importantly, Startime is credited with being one of the lead players in the  wave of popularity still being enjoyed by Jamaica’s music pioneers who triggered the birth of the Jamaican music industry in the late 1950s/early 1960s and laid the foundation for the international prominence which Jamaican music now enjoys.

Artists of the caliber of John Holt, Alton Ellis, Dennis Brown, Gregory Isaacs, Ken Boothe, Culture, Hopeton Lewis, The Melodians, U Roy, Phyllis Dillon, Leroy Sibbles, Errol Dunkley, Johnny Clarke, Horace Andy, the Mighty Diamonds, ska king Derrick Morgan, the Heptones, the Clarendonians, Ernie Smith, Pat Kelly among a host of others have Startime to thank for the second wave of popularity and regular performances they have enjoyed since the first advent of the vintage concert in 1988.

In addition, the showcasing of these veteran performers over the years on Startime, and the consistently high quality of the show, has made it the most significant contributor to the preservation of Jamaica’s music heritage. 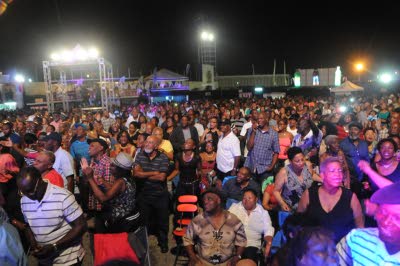 From its small start as a monthly event (April – December) in the 120-seat Old Spanish Town Bar at the Oceana Hotel in 1988; then to the Hotel’s larger 2nd floor pool deck in 1989; Startime experienced a forced hiatus in 1993 with the closure of the Hotel; and triumphant return in 1995, at the Club Mirage in the Sovereign Shopping Centre, then the corporate area’s hottest nightspot. But after just two stagings,  the Club Mirage became too small and the show had to shift to the larger Peppers venue on Upper Waterloo Road where it continued to rock the city and bring joy to its patrons.

As the support base grew, the show had to make yet another move in 1997, this time to the Countryside Club on Eastwood Park Road where it hit unprecedented heights of excitement, forcing promoters MKB to seek yet another venue as the fans continued to flock to what had now become an exciting, professional, high quality production that was the island’s most acclaimed stage show….

The establishment of the original Mas Camp on Oxford Road and an invitation from the lessors in 2000 to make the venue Startime’s new home was timely, and Startime was nestled at Mas Camp until it ended its first run in 2006.

Startime also had one major overseas tour with a lineup including Gregory Isaacs, U Roy, Frankie Paul and Lloyd Parks and We the People Band making a very successful  six-week/17show European tour of Sweden, Holland, Germany, England, Italy, Switzerland, France and Spain. 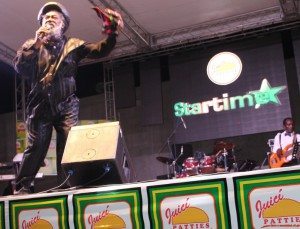 Awards won by Startime include “Show of the Year” on several  occasions; several Binns Awards and Rockers Awards;

the Martin’s International Award and The Red Stripe Award for its contribution to the development of Jamaica’s music legacy.

The show has also won awards over the years for the consistently high quality of the production and its dedication to on-time starts.

MKB Directors Michael Barnett and Keith Brown have won several awards as “Promoter of the Year”, and were also awarded the Kingston and St. Andrew Corporation’s (KSAC) Gold Medal for their work in preserving Jamaica’s musical heritage.

MKB and Startime have also received special commendation from visiting Heineken executives from Holland for the outstanding contribution Startime made to the development of the Heineken Brand in Jamaica which was reflected in what at the time were record Heineken concert sales figures, and the introduction of the now legendary “bucket deal”.

Startime is known and recognized as ‘the people’s show’ and over it’s now 30 year history, has featured almost every who’s who foundation Jamaican artist, along with several American rhythm and blues stars.

After all is said and done …. there’s absolutely no doubt about it …. Startime is the all-time premier Jamaican vintage concert and the number one choice of the Jamaican music-loving population !!

Startime rose to new heights in 2017, when celebrated American legends of soul The Manhattans featuring Gerald Alston came to Jamaica to headline what became one of the greatest Startime Productions in its illustrious 30 year history at The National Arena, Kingston on Saturday July 8, 2017 !!

It was a memorable occasion indeed as The Manhattans (who gave an outstanding performance) were celebrating their 55th birthday in Jamaica, while Jamaica  was also celebrating 55 years of Independence !!