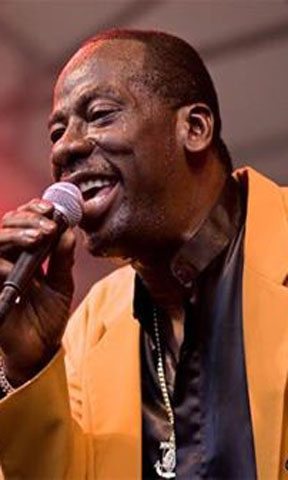 Leroy Sibbles – a wonderful vocalist and fine bassist – initially gained fame as lead singer of the Heptones trio, one of Jamaica’s most popular groups of all time, accomplished  at both rocksteady and reggae.  Sibbles’ wonderously soulful leads and excellent compositions were augmented by his smooth, hypnotic bass lines.

Unfortunately, a once musically profitable relationship as lead singer of the Heptones collapsed, but Leroy has gone on to pursue a very successful solo career which sees him ranked among Jamaica’s best performers with a rock-solid stage act which is still in demand locally and internationally.

Beyond his tremendous work as a singer/songwriter, Sibbles’ contribution as a bass player to the collective output and enduring legacy of Studio One is perhaps his greatest achievement. In fact, a closer look at his bass-playing career reveals an enormous contribution to the feel and direction of Jamaican music through one of its most creative eras – rock steady.

Sibbles was encouraged to learn the bass by Jamaican music giant and Studio One keyboardist/arranger Jackie Mittoo, who needed a bass player for live performances by a Lounge trio he had formed, and the rest is history !!

When Mittoo migrated to Canada and left full time duties at Studio One, Leroy took over, arranging sessions, singing harmony, and played bass as a part of the studio crew variously known as the Soul Vendors or Sound Dimension. These musicians, with the notable aid of engineer Sylvan Morris, laid their rhythms behind vocalists Bob Andy, Alton Ellis, Horace Andy, Carlton (Manning) & The Shoes, The Abyssinians, The Gladiators, Willie Williams, Ken  Boothe, John Holt, Burning Spear, Dennis Brown, Slim Smith, and scores of others.

Sibbles was a key contributor to tracks like Roy Richards’ Freedom Blues; Love Me Forever by Carlton & The Shoes; Satta Amassagana and Declaration of Rights by the Abyssinians; Stars and Queen of the Minstrel by The Eternals led by Cornell Campbell; Ten To One, Losing You and You’ll Never Know by the Mad Lads; Door Peep and Swell Headed  by Burning Spear; and instrumentals like Real Rock, Rockfort Rock, Swing Easy and Full Up.

Sibbles moved to Canada in 1973 and became a sizable pop reggae star there. He won a Juno award (Canada’s version of the Grammy), recorded an album for A&M and cut several good albums for Pete Weston’s Micron label.

On stage, it’s all dynamic action as he holds his audiences spellbound belting out hits like Party Time, Fatty Fatty, Sweet Talking, Heptones Gonna Fight, Equal Rights, The Impressions classic Choice Of Colours, Book of  Rules, Pretty Looks, Why Did You Leave To Cry, Only Sixteen, I Shall Be Released, Baby Be True, Get In The Groove, and Give Me The Right.

In recent years Sibbles has been working on new material at his studio in Kingston. He’s also producing for popular artists, up and coming singers, and composing new songs.

In the near  future, he plans to release more original material; but on Saturday May 5, at the Mas Camp, it’s oldies time as Leroy belts out the big hits which have made him an artist that the Startime crowds travel miles to see.