Comes To An End In Jamaica 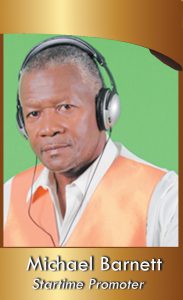 Michael Barnett says he will end the ever popular Startime concert series at Mas Camp in Kingston on Saturday May 5, 2018, with a final staging featuring Reggae Queen Marcia Griffiths, Lovers Rock Prince Sanchez, Leroy Sibbles, DJ King U Roy, Horace Andy, Boris Gardiner, Ernie Smith, Cornel Campbell, and 12 year old star of tomorrow Xylophone all backed by Lloyd Parks & We The People,
Barnett told Startime media partner the Jamaica Observer that the cost to promote live events in Jamaica, coupled with the difficulty to attract adequate cash sponsorship, as well as the passing of a number of top rock steady and foundation reggae artistes, influenced his decision to call it a day.

“It’s been 31 years and over 150 Startime concerts, and everything must have an end. In these times, it is proving more and more difficult to put a line-up together to excite and ultimately satisfy our faithful and loyal core audience without repeating artistes from recent Startime concerts, ” said Barnett. “Also, the budget for stage shows are skyrocketing with no guarantee of cash sponsorship, and with the unpredictable weather conditions, the risks are now far greater for promoters. ”

Barnett launched what was then Heineken Startime in 1988 at the Oceana hotel in downtown Kingston with Gregory Isaacs backed by Lloyd Parks & We The People band performing. The series took off during the 1990s and helped spark a major rock steady revival in Jamaica and around the world. Many of the acts who helped to make Startime a hit have passed on. They include Dennis Brown, John Holt, Alton Ellis, Delroy Wilson, Gregory Isaacs, Brent Dowe and Tony Brevett of The Melodians, Hopeton Lewis, Phyllis Dillon, Joseph Hill of Culture, Scotty, Roy Shirley, Sugar Minott, Frankie Paul and duo Bunny and Scully among others. Barnett and most of them were close friends. He said it was sad to see many of them pass facingpersonal struggles.
“It is heart-rending, as I have participated in the planning of many of the funerals. I cry inside at some of the stories. ”

A musicologist and programme host at KOOL 97 FM radio station in Kingston, Jamaica, 64- year-old Barnett said he got hooked on rock steady music while attending St George’s College in the late 1960s. After migrating to the United States, he worked at Brad’s (1971 — 1977), a leading American/Jamaican record store in the Bronx, New York, which enhanced his knowledge of early Jamaican music. He returned to live in Jamaica in 1982, and it was while working as entertainment manager at the former Oceana Hotel, he kicked off the then Heineken Startime series in June 1988. He said there are no regrets.

“I’m overwhelmed every day! Startime began with then general manager Kenric Davis and me in the IOU-seat Old Spanish Town Bar in the former Oceana Hotel at the foot of King Street; and I have lived to see the show draw as many as 5,000-plus patrons regularly in Jamaica. Most importantly, Startime is credited with being the lead player in the wave ofpopularity still being enjoyed by Jamaica’s music pioneers here in Jamaica and overseas” he explained. “Credit must also go to my former MKB Productions partner Keith Brown who was instrumental in the post-Oceana Hotel continuation of the series.